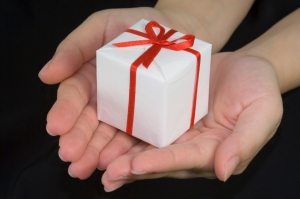 Husbands and gift-giving. It really is a hit or miss proposition, isn’t it? Either you have a husband who forgets to give you something entirely, or you have one who really means well, but ends up buying you some utterly useless gifts.

My husband is from the latter category.

I remember one year, my husband bought me the most beautiful cross pendant. It sat in my jewelry box for two years, because he didn’t think about buying a chain to accompany the pendant. Who does that? Did he just want me to stare at it and admire it from afar? I mean, this pendant was hardly the Hope Diamond for display at the Smithsonian.

Now I know how my daughter feels when she unwraps a gift, only to find that the batteries aren’t included.

Another year, he went to a high-end frame shop and spent an outrageous amount of money framing my diplomas as a gift. At one point, this would have been an extremely thoughtful gift, like when I was just a couple years out of law school, still beaming with pride. Instead, this gift comes ten years after graduation, when I could care less about my past achievements, because frankly, I’m too exhausted to care and too busy being smeared in kid poop and finger-paint. How about a night off from kid duty instead?

The classic, though, was on our FIRST wedding anniversary, and he surprised me by taking me to a fancy steakhouse. Sounds pretty good, you say? Well, it turns out this steakhouse is a glorified man-cave adorned with football paraphernalia, and I’m the only woman there that night at this cigar-smoking, scotch guzzling “old boys club.” Pretty romantic, huh? I guess all of the other women in town got the memo, because I surely didn’t. Oh, and did I mention that I don’t even eat steak???

I know I sound like a complete ingrate, and I honestly don’t mean to do so. My husband truly does mean well; my heart is genuinely warmed that he tries to do right by me, year after year.

However, every so often, I have to ask myself, “Does he really even know me?”

And, that’s when I realize that my husband doesn’t really know me in the way that I want him to know me.

Why? Because the way I want him to know me is based on fairy tales, Glamour magazine, soap operas and Harlequin romance novels—the stuff of pure fiction. More importantly, as Bindu said, he’ll never know how to fill all of the achingly-large God-sized holes in my heart.

Not as a mind-reader, and not as some all-omniscient gift-giving genie, but rather as my helpmate, friend, lover and companion.

And, that, is greater than any gift that he could ever wrap and give me…batteries included.

We're modern women just like you, loving Jesus, and sharing our stories in an honest, personal and meaningful way. FemmeFuel aims to inspire, empower and provide you with the fuel you need to live out your purpose in Christ.
Join 2,045 other subscribers